Chronicles of Japan Konichuwa, ohaiyo gojaimas, hearing this word my heart began to beat first. I was asking myself “am I really in Japan?”I assured myself saying yes when we were welcomed warmly by our co coordinator KOYOKO SUNAGA .After 7 hours plane journey all day long, we reached safely at 7 am, 17 April,2016. Our Bangladeshi team consisted of 20 students and under the guidance of 4 teachers.

We went to Japan to participate in Shakura Science Programmed .JICA took our each and every responsibility in Japan .It was an educational tour of 7 days. We were visiting world famous universities and cultural places of Tokyo and Kanagawa. Nippon travel agency offered bus for this program. In the very first day when we were extremely tired after a long journey Japanese people’s smiling face, hospitality and friendly nature refreshed us and made us lively. We went to the imperial palace in that day. There we admired the age old palatial building and different shapes of pine tree.

In the next day we went to JAMSTEC which stands for Japan Agency for Marine Earth Science and Technology in Yokosuka, Kanagawa. The main objective of JAMSTEC is to contribute to the advancement of academic research in addition to the improvement of marine science and technology by proceeding the fundamental research and development on marine, and the co-operative activities on the academic research related to the ocean for the benefit of the peace and human welfare.

In JAMSTEC we observed many instruments including SHINAKI 6500, and many robots which are used to deep sea. The shimmering expanse of water of the pacific ocean which is beside JAMSTEC charmed us most. After visiting JAMSTEC, we visit Kamakura where the gigantic sculpture of Buddha of Kamakura hachimangu shrine is locatedwhich amazed all of us. The day of 19th April ,we visited to the Tokyo University at kagaruzaka and knew the outstanding facilities of stuying there.

The university has 9 diferent faculties and its goal is that”building a better future with science.”After an appetizing lunch,we enjoyed the excellent lecture by professor Jhin Akhiyama,one of the greatest mathematician of recent time.In the afternoon,we had a tour in the region of Akihabara which is renowned for its many electronics and anime shops . Our 4th day in japan was quite interesting. Because in this very day we went to the national museum of emerging science and innovation which name is Miraikan.

The slogan “open your eyes to science : see a whole new world” expresses the stance of Miraikan.We were enchanted at the lecture given by Dr.Mamoru mori, a famous astronauts and the director of Miraikan.Visiting Kitasato University and meeting with Dr.Satoshi Omura who was awarded Novel Prize in Medicine in 2015 was a glorious moment for us.In this day we also thrilled at the picturesque of Harajuku and Meiji shrine. The most eventfull day of our stay in japan was at 21 April.Because in this day we visited Shibuya Junior and Senior High school.

In that day we laughed to our hearts content with our Japanese friends and saw different parts of their school.We also participated in origami contest and gave them various gifts as a token of frienship. In that day we also visited EDO-Tokyo museum and asakusa(two historical landmarks of Japan.In the EDO –Tokyo Museum we were charmed to see “rickshaw” and various eye catching materials of ancient Periord of Japan. The last day was full of excitements and curiousity.In the morning ,we went to School of scienc,the University of Tokyo .

There we visited Science Laboratory,science museum, museum of mathematics and the laboratory of Novel laureate Dr.Takaaki Kajita .We also saw the outstanding fields and facilities of various research and also top secret levels.We enjoyed many practical science magic. In the afternoon a wonderful closing ceremony was held and a buffet dinner was presented to bid us farewell. Students from Bangladesh,India,Philippines and Indonesia participated in cultural program.Honorable ambassadors of these countries and the chief of JST and JICA was also present there.We were given certificates and badges from Shakura Science Club.

We learnt a lot from this memorable tour.We learn t about not only Japanese but also Indian,Indonesian,Philippines people , their religion,tradition and culture from our heartiest guide and co-coordinator and the participant of this program. We had to obey Japanese rules strictly.Likewise we were not allowed to gather anywhere and be a hindrance to the passers by,follow the traffic rules,fastened with seat belts while in the bus etc.

In the day of 23 April, we left our hotel and headed towards the airport.Our wonderful journey comes to an end.We returned with lots of memories containing in our hearts.A new skyline of education was introduced to us from the land of sunrise,Japan…………………………………….. 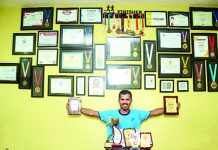 A wonderful teenager who travels around the country on foot