Here is an excerpt from one of the books of Paolo Coelho-“Once upon a time, powerful wizard, who wanted to destroy an entire kingdom, placed a magic potion in the well from which the inhabitants drank. Whoever drank that water would go mad.

The following morning, the whole population drank from the well and they all went mad, apart from the king and his family, who had a well set aside for them alone, which the magician had not managed to poison. The king was worried and tried to control the population by issuing a series of edicts governing security and public health. The policemen and the inspectors, however, had also drunk the poisoned water, and they thought the king’s decisions were absurd and resolved to take notice of them. 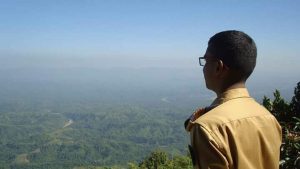 When the inhabitants of the kingdom heard these decrees, they became convinced that the king had gone mad and was now giving nonsensical orders. They marched on the castle and called for his abdication. In despair, the king prepared to step down from the throne, but the queen stopped him,saying: ‘Let us go and drink from the communal well. Then we will be the same as them.’ And that was what they did. The king and queen drank the water of madness and immediately began talking nonsense. Their subjects repented at once; now that the king was displaying such ‘wisdom’, why not allow him to rule the country?

The country continued to live in peace, although its inhabitants behaved very differently from those of its neighbors. And the king was able to govern until the end of his days.” We live in a world full of mad people. Everybody has his or her specific way of exposing madness. I have a predilection for writing. Writing is my madness. I hope the readers would excuse my single-mindedness in this writing.

The way towards fulfilling our dreams is as prickly as that towards fulfilling our aims. The world considers the dreamers as ‘the madders ones’. For those madder people are dangerous, they make their dreams come true. Everyone in this world is dealing with a very tough schedule. An ideal life of a man living in Bangladesh can be exemplified here. During mid and high-school period, a student remains obsessed with his/her studies. Exams, quizzes, homework deluge his/her life. But no one can get an abundance of time in the university/college life either. Many students start their professional carriers from this time. Besides, they have to face numerous exams and assignments too. And then the professional chores frame their lives. In short, it is really tough to find some time for our madness.

But the dreamers always find some time for themselves. They fulfill their dreams and also lets the world dance with their madness. To realize it, we may peek into the lives of some ardent dreamers. Once Humayun Ahmed was passing a very hard time. His semester exam was ahead but he was distracted. He could not concentrate on his studies. One evening, he took his notebook and started writing. He wrote at stretch and finished his work at late midnight. Thus we got his first novel “Nondito Noroke’.

Bill Gates is more known as a ‘Harvard dropout.’ He also has a charming history. When he was in eighth grade, he started real programming in Lakeside School. In 1971, he and his friends used to hang around the computer center at the University of Washington. When he was dropped out of Harvard, he had been programming for seven consecutive years.

J.K. Rowling’s path towards becoming a writer was never easy. She was having fear of conspicuous failure while submitting her first book. To the young writers, she suggested 5 ‘must do’s in one of her articles ‘On Writing’ – reading, maintaining discipline, defending humility, having courage, and finding independence. Sometimes the muse does not work on us. Yet, the dreamers must move on. As regards the present context, now we are facing a very intense situation. We cannot stick to our plans even if we want to. Both of our student and professional lives are hampered. But it might be the perfect time to unleash our madness.