Once your mindset changes, everything outside will change along with it. In October 2012, on her home from school, a masked gunman boarded at the school bus and asked, “Who is Malala?” The girl replied, and immediately she was shot at the left side.

She woke up 10 days later in a hospital in Birmingham, England. The doctors and nurses told her about the attack —and that people around the world were praying for my recovery. My dear audience, later on, she established the Malala Fund, a charity dedicated to giving every girl an opportunity to achieve a future she chooses.

In recognition, she received Noble prize for peace and became the youngest-ever Nobel laureate. Why Malala did that day recognized her in front of the Taliban? Why did she engage herself in movements and many more, which caused her to go to the hospital? She would have been silent, right. But her mindset did all these to her. Malala Yousafzai proved that the only change of mentality and mindset is to make a difference. The established set of attitudes held by someone is known as a mindset. 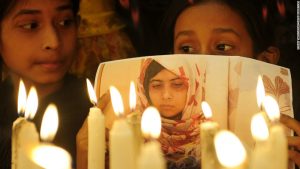 The phrase “women’s empowerment” is used in the Gender Equality & Women’s Empowerment space (and beyond), it is generally in the context of issues —economic empowerment, political participation, and girls’ education. Kofi Anan said, there is no tool for development more effective than the empowerment of women in terms of girl’s education. Let us

look back to our past when women had no chance to even go outside. Then and that time, Begum Rokeya believed that women were held back by the ignorance of their own rights and responsibilities. In1909, she set up the Sakhawat Memorial Girl’s School immediately after her husband died, the first school for Muslim women in the region, starting with five students. She went from door to door, trying to persuade Muslim families to allow their daughters to attend school.

My dear opponents, when BegumRokeya herself, at first changed the conservative mentality of girls, so that they can come out from their ignorance. How can we deny the mindset of women as the biggest challenge? In terms of women empowerment, we mainly focus on the participation of women in political activities. Only 24.3 percent of all national parliamentarians were women as of February 2019, a slow increase from 11.3 percent in 1995. As of June 2019, 11 women are serving as Head of State and 12 are serving as Head of Government. Source: UNWOMEN.

India, once ruled by Indira Gandhi, now has just 64 women among its 542 MPs. The reason is quite clear, the mindset of women. Recently, the effectiveness is very much in doubt in Brazil. The country’s quota law, which initially mandated that only 20 percent of candidates be female, was instituted in 1995 and inspired by calls for quotas at the UN’s Fourth World Conference on Women that same year. According to the Brazilian feminist group CFEMEA, which monitors women’s issues in Congress, women constituted just over 5 percent of the chamber in 1989. Between 1945 and 1982, that figure was

below 2 percent. My dear opponent, here Brazilian women got the full opportunity in terms of political participation. However, they denied, because of their mindset, lack of education, ignorance, and insecurity. The United States, which ranks 85th on the IPU’s gender-equity list is also not taking quota reformation as a step. Because, according to them, the main challenge is to change the mindset first, rather than changing the quota.

According to women’s rights activists, women members of our political parties generally do not have any decision-making power and their male counterparts, which definitely discourage the educated and intellectually active women to come to politics, always look them down upon.If we look at the economic empowerment of women, since 2013, because of the UN Women supported a review of Kenyan public procurement, a minimum of 30% of annual government spending is reserved for women, youth, and people with disabilities.

In addition, UN Women, before starting their work for the framework, focused upon education, self-awareness, and lack of ignorance. Because, they at first faced the challenge of the mindset of women, to conquer this inequality problem and presented a smooth resolution. As Steve Maraboli said, once your mindset changes, everything outside will change along with it. However, today in our country, many women are giving their ideas shape. Persons like, Bibi Russel, Rubaba Dowla, Taslima Miji, and many more are proving themselves every day. They believed in their goal, and they had firmed mindset about their

desire, passion. But, in Pakistan, where many women refuse to complain at the police just for their ignorance, religious thoughts, in order to maintain social norms. What will we do with facing all those challenges, where still now, many women think themselves for nothing? Were many women, for the cause of religious circumstances, do not go outside? As Justine Creening says, No country can truly develop if half of its population are ignorant.

Therefore, women’s empowerment is necessary for the sake of nation’s overall development. For that, we need to change our mindset. As Angela Merkel quoted, we do not want the clock to be back on Sunday, we want the clocks to be forward. Despite having a very luxurious life, Sanna Marin took the responsibility of the whole Finland government only for her mindset to make a difference, to make a change. So, think logically instead of acting as a true feminist. Because  the mindset of women is the main challenge in pursuing women empowerment.