Aparajeyo Bangla (Bengali: অপরাজেয় বাংলা) is one of the most well-known sculptures dedicated to the Bangladesh Liberation War in 1971. It is located on the campus of Dhaka University, just in front of the Faculty of Arts Building. The sculpture work had started at the end of 1973 based on sculptor Syed Abdullah Khalid’s design and superintendence of the DUCSU Authority.  It is a sculpture of the three figures, the central character, a village youth stands in the middle clutching the strap of a rifle in his hand and a grenade in the left. To his left is an urban youth with a rifle. At the right is a young lady devoted to nursing with a first aid box hanging from her shoulder. These three represent the concerted strength of the whole Bengali nation.

Built-in 1990, Swaparjita Swadhinata (Self-earned Freedom) is a sculpture by Shamim Sikder commemorating the Bangladesh Liberation War Located at the intersection of TSC and Rokeya Hall at the University of Dhaka, Shoparjito Shadhinota depicts the horrific mass killing of intellectuals, freedom fighters, and ordinary people – and how they prevailed and united against tyranny. This is one of the most famous sculptures in Dhaka done by renowned sculptor Shamim Sikder in memory of the Liberation War. 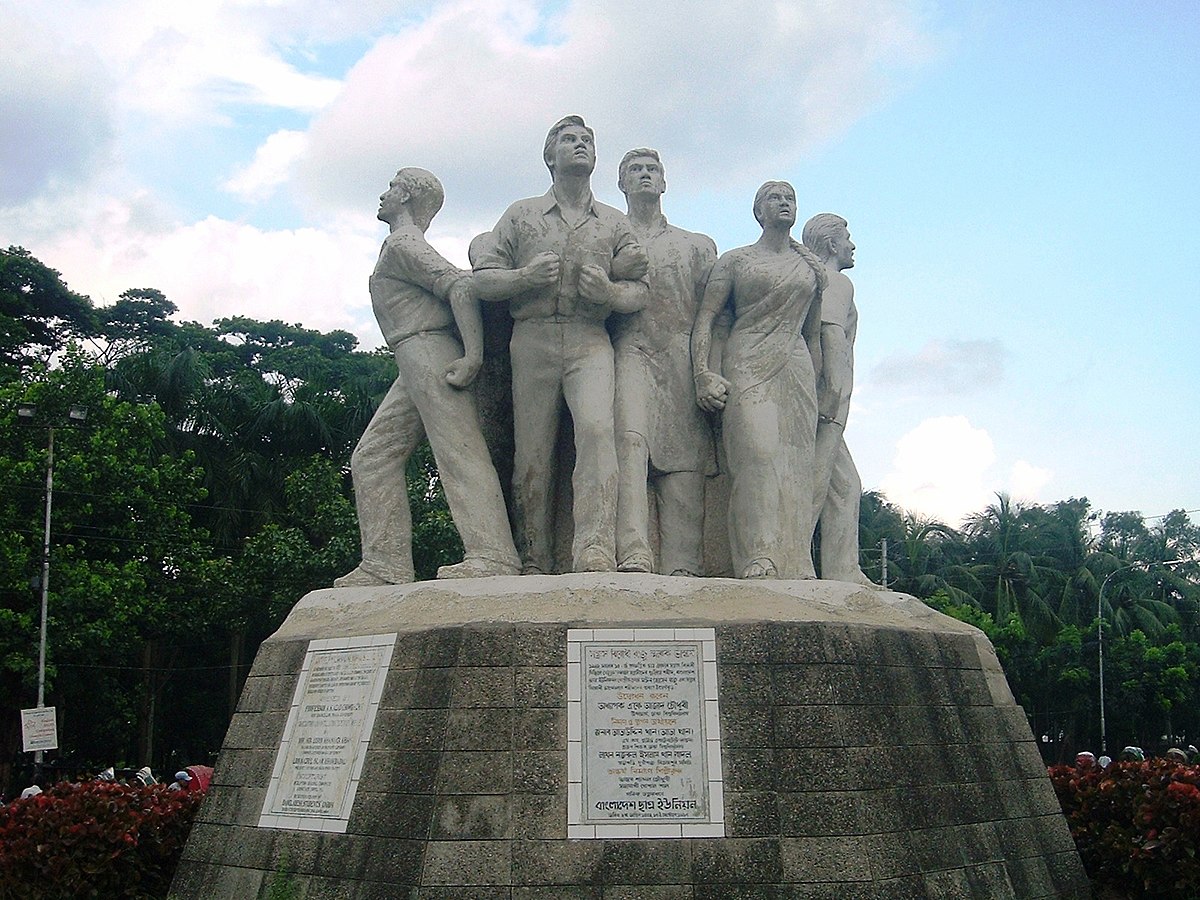 It is a sculpture located at the University of Dhaka campus of Bangladesh. It was created by Shaymol Chowdhury and considered one of the best sculptures in Bangladesh. It is dedicated to the memory of a student of Dhaka University named Moin Hossain Raju an activist of Bangladesh Student’s Union who was killed while protesting against Terrorism. Anti Terrorism Raju Memorial Sculpture was built in the late 1997s.

Financed by Dhaka Zilla Parishad and designed by Ehsanul Ahsan Khan, Joyita-71 was built in 2014. It is situated in Eden Women’s college. All over the wall circling the monument are portrayals of the 7th March speech by Bangabandhu and women’s movement in 1971. Garden and trees around this monument amplify its beauty. 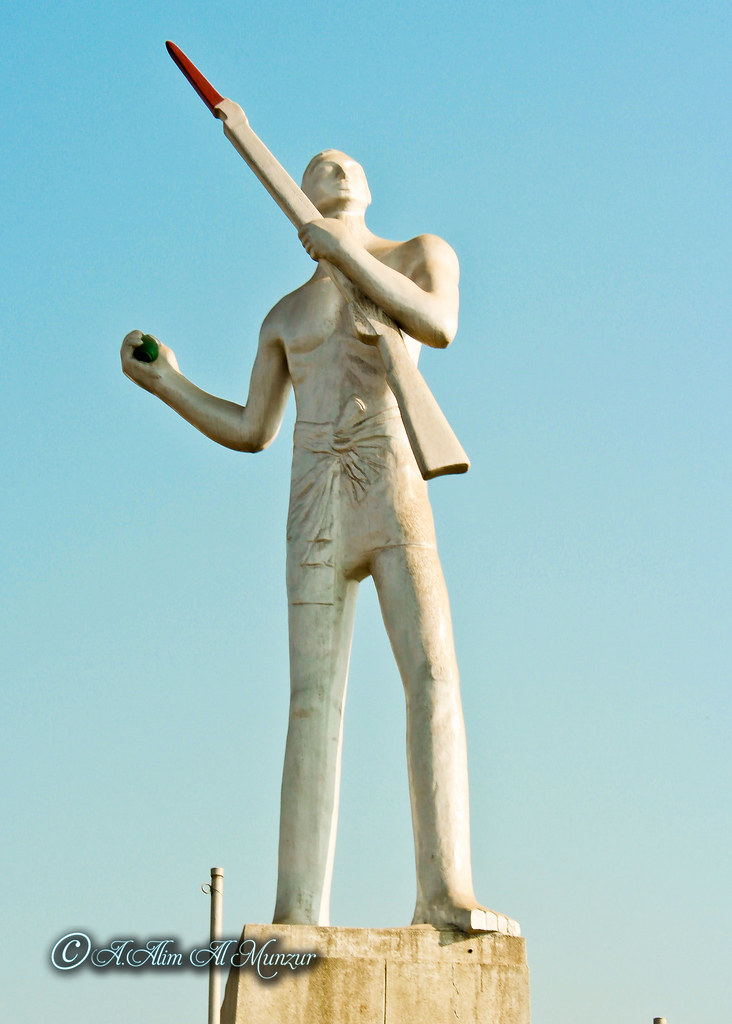 Located in Jaidebpur, and constructed in 1973, it is the first post-Liberation War sculpture in Bangladesh. It depicts a freedom fighter with a grenade in his right and a rifle in his left hand. The sculpture is an 18 feet high concrete piece on a 24 feet pedestal. His ‘Jagroto Chowrongi’ is considered one of the best sculptures in Bangladesh, considering both form and theme, by art critics.

In the context of the Bangladesh Liberation War, a number of monuments have been built in Mujibnagar, Meherpur. Altogether, it is called “Vaskarje Bangladesh”, which translates to “Bangladesh through monuments”. These monuments depict the historic 7th March speech of Bangabandhu, the oath-taking ceremony of the country’s first government, the surrender of Pakistan army, and many other historic events. Photos of the monuments stated are given below. All these monuments that carry the memory of the war of 1971 attract everyone who visits this place. 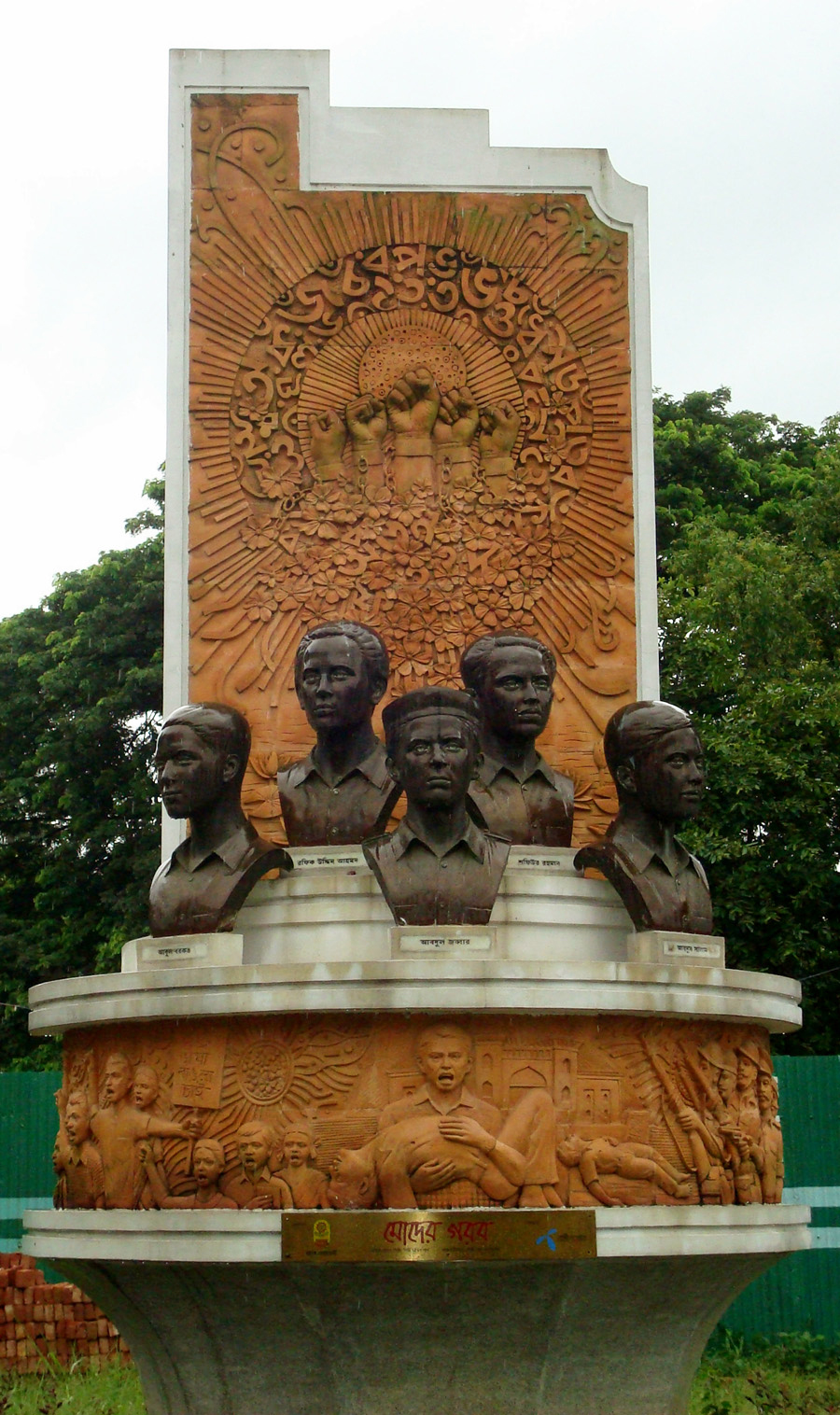 Moder Gorob or Our Pride is a sculpture situated in front of the Bangla Academy building in Dhaka, Bangladesh. It was dedicated to the memory of those killed during the Bengali Language Movement demonstrations of 1952 when protesters demanding Bengali as a state language of former Dominion of Pakistan were massacred by Pakistan Police.[1]There are five different metal sculptures of Abdus Salam, Rafiq Uddin Ahmed, Abdul Jabbar, Shafiur Rahman, and Abul Barkat. These are situated on a base. In the rear part, there is a long wall rising. There are three steps in the upper part of the wall. Both sides of the wall and other brick-made parts are ornamented by frescoes of the Language movement of 1952. 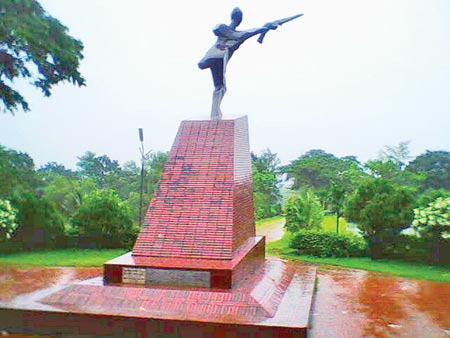 Considered as the symbol of Khulna University, Adamya Bangla is a 23-feet tall monument. It is situated right in front of the Shahid Minar of the campus. Designed by Gopal Chandra Paul, it portrays four freedom fighters, both men and women. It shows how both men and women played an important role in the Liberation War. It stands on a stage around which are portrayals of historic moments.

The sculpture has been designed and created by renowned artist Mubarak Hossain Nripal of Nree School of Sculpture, Narayanganj. The sculpture, in a realistic form, is twelve ft high and has been built on a six ft base. The National Flag on the hand of a male student and a book on the hand of a female student symbolizes the Bangladeshi constitution. The figures represent the post-Liberation War generation of Bangladesh.

Sohrab Jahan, a student of 41st batch of Fine Arts faculty at the university, constructed the sculpture with the assistance of Mujahidur Rahman Musa and Jayshish Acharya.
The sculpture, first of such kind in the campus, has been named ‘Joy Bangla’. It is themed on the Bangladesh Liberation war 1971. It is built upon 2 layers and around 20 feet tall. 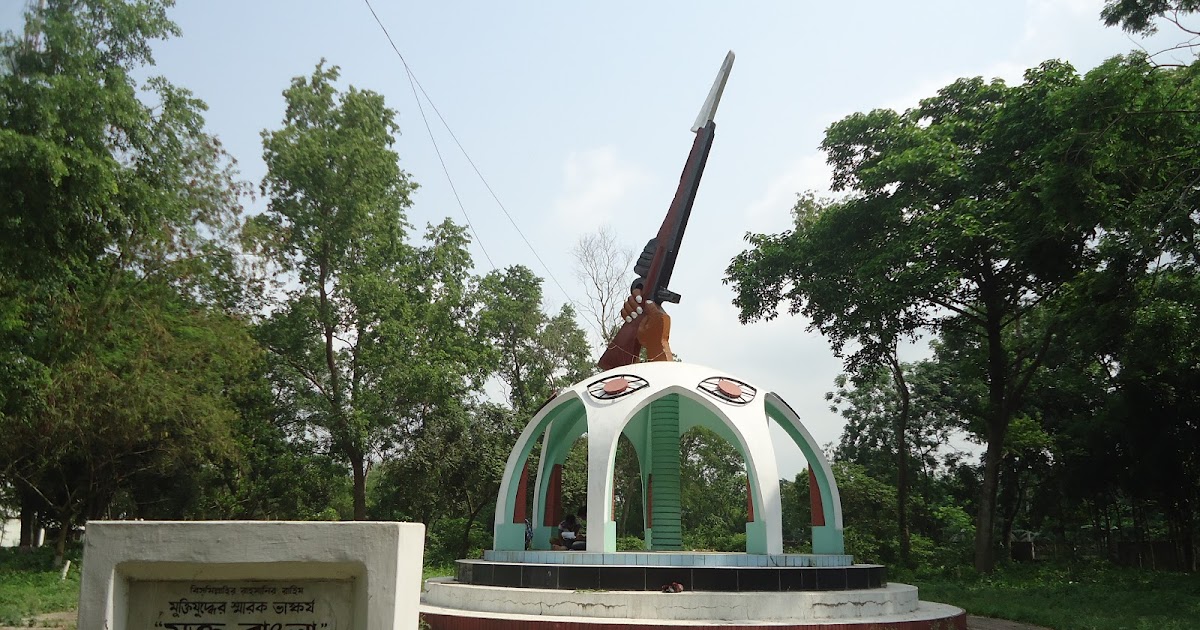 Situated in Islamic University,  liberation sculpture ‘Mukto Bangla’ was made to pay tribute to the valiant sons of the land who sacrificed their lives for the country’s independence. The main floor of the pillar is meant to establish the government of Mujib Nagar. Mosaic stone, blue tiles, is used to indicate the peace of humanity. From the second step to the setting of black colored stones, it means mourning. The third step which is the white color means peace and communication. The 4th step on the altar is made of red ceramic large bricks, which means movement and war. All the bottom can be seen in broad tiles bricks, which means that the continuous movement.

Durbar Bangla, like most of the monuments in Bangladesh, was built in the context of the Liberation War. It is situated in Khulna University of Science and Technology. Its magnificence catches everyone’s eyes on the campus. The monument was built in 2013 and was designed by Gopal Chandra Paul. To many, it is the biggest attraction of KUET. Fo the students, it is a source of strength and courage.