Bear Grylls: Conquering The World Of Adventure. Everyone in this digital world is familiar with the name Bear Grylls. The presenter of the popular TV series Man vs. Wild, Bear Grylls is a British explorer, writer and television presenter. However, we always saw him dealing with barbarians, eating snakes and spiders, and doing lots of other unorthodox kinds of stuff.

Some amazing facts you didn’t know:

1. Bear Grylls is not the real name of him. His authentic name is Edwar Michael Grylls.

2. Her only sister Lara started calling him “Bear.” Consequently, after a week he was born.

3. As a matter of fact, Bear Grylls climbed Mount Everest within 90 days back in 1998 at the age of just 23. Not to mention, his fame spread all around as he conquered Everest as the youngest person. His name also rose in the Guinness Book of World Records. However, his record has been broken 4 times so far.

4. Bear had an accident while jumping with a parachute just 18 months before he conquered The Everest. Furthermore, 3 bones of his spine broke.

5. Moreover, Bear received a black-belt in the sport of bare karate. Bear Grylls: Conquering The World Of Adventure.

6. He has served in the British Special Air Service for 3 years. He left the job after he was injured in the parachute jump. 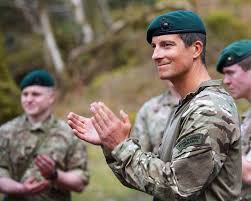 7. From this special air service, he achieved some venturesome training. Worth mentioning are parachute jumping, diving underwater, survival tactics, and unarmed combat.

8. Bear Grylls authored his first book in 2000. His book Facing Up, exceeded the top 10 bestsellers list in Britain, back in that year. The book was later published in the United States as The Kid Who Climbed Mount Everest.

9. He has written a total of 11 books. Amongst them, 4 fiction books are there for children titled Mission Survival. Bear Grylls: Conquering The World Of Adventure.

10. His 1st TV break came when Sure for Men deodorant featured him in an ad advertisement. The ad portrayed the story of his Mount Everest summit.

11. The first major TV series he starred in was for Channel four, called Escape to the legion, where he went through simulated basic training with legionnaires in North Africa.

12. He started to host a TV show in 2006 on the Discovery Channel called “Man vs. Wild” which had 12 episodes of 1 hour. He successfully hosted 6 seasons of the show.

13. Consequently, the show gathered 2.4 billion global audiences throughout 200 countries. It was the no.1 cable show of that time in America.

14. The Scout Association appointed him as Chief Scout in 2009. Consequently, he became the youngest person ever to hold this position, for millions of scouts around the world. Bear Grylls: Conquering The World Of Adventure.

15. As a result of a contract disagreement, The Discovery Channel fired this famous British Adventurer in 2012.

Bear Grylls really is a great adventurer. His laconic life of adventure has a lot to teach us regarding life. The hard work, perseverance, diligence, and valor he’s shown is untangible. To add to the info, Bear Grylls runs the Bear Grylls Survival Academy in addition to his many other projects. Adventurers throughout the world enroll in the academy to learn survival tactics. So, what are you waiting for?