The historical Jinn Mosque Of Thakurgaon.

The Balia Mosque in Thakurgaon is a witness of history and antiquity for more than a hundred years. People colloquially know it as the mosque of the jinn. Every day visitors come from different parts of the country.

The historical Jinn Mosque Of Thakurgaon. It is situated in Bhulli Hat. Bhulli Hat is on the way from Thakurgaon district town to Boda Upazila of Panchagarh. This archaic beauty is about three kilometers east of there. Publicly known as “Balia Jinn Mosque.”

The historical Jinn Mosque Of Thakurgaon. Talking about the mosque with a local elder named Ahmed Ali. He unraveled the mystery. Ahmed said that on a certain New Year’s Eve, a strange incident occurred. According to Ahmed, the jinn-fairies liked the area of ​​Balia Union when they flew over it. Then they came down to the ground and started building the mosque. But they left the work unfinished at dawn before the dome was built. As a result, the magnificent mosque stands without a dome. The jinn-angels have made some part of it. Hence people colloquially knows it as the mosque of jinn. Such a myth is famous in the name of this mosque. 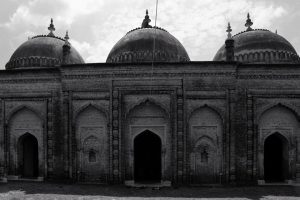 The mosque is about 110 to 112 years old. The area was somewhat elevated and pyramid-shaped. Almost every day many people come to see this beautiful mosque. Worshipers come from far and wide to see the mosque and perform prayers there.

The historical Jinn Mosque Of Thakurgaon. The engraved scribings on the walls depict, the mosque was built in 1317 BS. Where 1317 BS means 1910 Ad. The mosque was built by Meher Box Chowdhury. In one of the tombs, his expiry was engraved. Meher Box completed most of the works during his time. He departed after finishing the construction.

History of the construction of the mosque

After some years, Meher Box’s younger brother took the initiative to rebuild the mosque. But he also died without completing the construction. As a consequence, the mosque stands without a dome.

Finally, Tasrifa Khatun, a prominent Bangladeshi industrialist, and daughter of the late Basrat Ali Chowdhury. She along with the son of Meher Boks Chowdhury started the renovation work of the Balia Mosque in 2010 with the technical assistance of the Institute. At the same time, they built the dome in the same way. Architect Syed Abu Sufian Kushal proposed the idea.

Features of the mosque

The mosque is on a platform that is 5 feet 3 inches high from the ground level. It is in a rectangular complex of 72 feet 6 inches in the east-west and 69 feet 2 inches in the north-south. The rectangular complex is divided into three sections. It includes a staircase, an entrance with an open courtyard, and a main building or prayer hall. The main building is 25 feet 11 inches wide on the east-west. The roof of the mosque is 18 feet high from the platform.

The roof of the mosque has three domes and eight minarets of the same size. Of which four minarets at four corners are large and the others are small. The entire mosque, including the foundation, is made of lime mortar and hand-baked bricks. There is no decoration in the bricks. Even so bricks have been cut in different places on the walls of the mosque and designs. Such as jugs, bells, dishes, bowls, Amalaki, Padma, etc. have been made.

The mosque is an epitome of infrastructural excellence. Throughout the year many tourists and sightseers come here. The majestic myth of the mosque embellishes its beauty.

Perks of being a quaranTEEN !!